Song catalogs have become a purchase of high significance over the last few years in the music industry. With the recent increase in popularity of older music, artists’ catalogs and entire catalogs from other companies have become a large and profitable asset amongst music publishers and labels. Buying the rights to the entirety of an artist’s work is more popular than many may think. Industry frontrunners such as Universal Music Publishing and Hipgnosis Songs Fund, who have been obtaining the rights of other people’s music for years, have spent hundreds of millions of dollars thus far on such acquisitions.

Concord Music Publishing [Cautious Clay, Jacob Collier, Denzel Curry] made a significant stake in catalog acquisitions back in 2020 with a $100 million deal with Pulse Music Group [YEBBA, Ty Dolla $ign, James Blake].[i] This provided Concord with the right to administer Pulse’s catalog and all future signings under the label. When speaking on the purchase, Steve Salm, Concord Chief Business Development Officer, commented that “Pulse is a company that Concord has always greatly admired, and this collaboration instantly makes Concord a leader in the frontline pop, hip-hop, and R&B publishing world.”[ii]

According to Music Business Worldwide, catalog and music rights acquisitions were a large investment amongst music labels and publishers in 2021. After receiving confirmed prices from industry sources, they estimate that at least $5.05 billion was spent.[iii] Catalog acquisitions offer lucrative revenue streams for companies who purchase these rights since they become in charge of how that music is used. This is especially predominant for publishing companies. This year’s most prominent investor was Primary Wave, but other companies like Reservoir Media Management and Round Hill were not far off.

Primary Wave [Bob Marley, Smokey Robinson, Boston] spent hundreds of millions of dollars on catalog acquisitions and stakes in other companies. In the second half of 2021 alone, the company acquired the rights to the music of artists including Prince, Bing Crosby, and Teddy Pendergrass.[iv] With a proclaimed spending power of $1 billion at the company’s disposal, according to Primary Wave’s CEO Larry Mestel,[v] they wanted to put their spending money to good use by investing in these catalogs. It was a very smart investment since these iconic artists and their music provide immense opportunities for Primary Wave’s personal gain.

The first big acquisition of the year was David Bowie’s song catalog in January 2022, which Warner Chappell Music purchased for $250 million.[vi] Purchasing the late musician’s catalog entails that the label now has the rights to hundreds of Bowie’s top hits such as “Ziggy Stardust,” “Where Are We Now?,” and “Let’s Dance.”

Universal Music Publishing (UMPG) is another major player in this music industry trend. On February 10th, 2022, UMPG acquired Sting’s and The Police’s catalogs. This deal was made to unite Sting’s publishing and recorded music rights under Universal Music Group (UMG)[vii]. “Together, UMPG and UMG will work with Sting to further build and expand his vast audience reach, strengthen the impact and indolence of his timeless works, and continue supporting future music releases.”[viii] Neil Diamond also sold his catalog to UMPG at the end of February. The transaction includes the rights to all recordings, masters, and videos Diamond created in his career, as well as 110 unreleased tracks and an unreleased album.[ix]

A company created for the purpose of acquiring songs, Hipgnosis Songs Fund is the first of its kind. It is a UK investment company whose purpose is to build a diverse portfolio of catalogs from groundbreaking artists.[x] While they are based in the United Kingdom, Hipgnosis has a global reach with clients and offices in other countries, including the United States.

Investors claim shares to music in Hipgnosis’ catalog so they can profit from per-play exposure of songs they have acquired the rights to, regardless of who has the rights to which catalogs. Shareholders include the IRS’ GIIN (Global Intermediary Identification Number) and SEDOL (Stock Exchange Daily Official List).[xi]

Hipgnosis’ song management list is relatively small yet mighty. Artists and songwriters on their roster include The Red-Hot Chili Peppers, Mark Ronson, Neil Young, and Shakira.[xii] The company’s advantage with the rights to these catalogs is prominent in the music industry: synchronization (sync) licensing.

One of the most popular sources of income in the music industry is synchronization, commonly known as sync(h), licensing. Licensing music allows music publishing companies to make money through the music in their catalogs by having them placed in films, television, and advertisements.[xiii] Since live events were canceled due to the COVID pandemic, sync licensing has also helped artists generate revenue and stay afloat.

Hipgnosis plays a role in sync because of its outreach. The company’s Investment Advisor creates sync opportunities for the roster with their relationships with notable broadcasting networks, advertising agencies, and television studios. These decisions are made after the Investor views songs in their catalog that could bring in a new collection of royalties through these sync placements, and having a diverse roster increases their chances of securing a placement.[xiv] One of their most recent highlights was in a trailer for the movie House of Gucci. Hipgnosis representation comes from David Stewart, a songwriter on their roster.[xv] They have sync placements in commercials for other films and product commercials.

During an interview with CNBC, Rebecca Valice, Copyright and Licensing manager at PEN Music Group, stated: “From a publisher’s perspective, it is extremely valuable to obtain the rights to a certain catalog that we can pitch for synch. A catalog can do its own pitching just because of its legendary success.”[xvi] Over time, sync placements can recoup the money acquirers spent purchasing the catalogs.

The Appeal of Older vs. Newer Music

Contrary to popular belief, older music is becoming the main focus in the music market. It is regaining popularity through TikTok, the Metaverse, and other social media platforms that feature music placements. MRC Data, a music-analytics firm, 70% of the United States music market is represented by older songs. The COVID pandemic gave people a need for nostalgia, and listening to music from earlier decades helped many feel the nostalgia.[xvii]

This is promising for older artists who sold their music and the companies that acquired their songs. However, the idea of older music gaining popularity over newer music leaves a negative feeling for some. Music writer Ted Gioia enjoys old songs, but during his interview with WBUR, he claims that remaining focused on older music is not good for the culture of the music industry. He now believes that every month of the year feels like December,[xviii] a reference to Christmas classics people hear released decades ago.

The fact that Christmas “classics” are older songs is not an accident. Most of the songs heard on the radio and in homes are more than twenty years old, yet they receive more plays than newer ones. Like catalog acquisitions of decade-old music, a significant reason older Christmas music is more popular is the feeling of nostalgia associated with the holiday season. In an interview with Wired UK, Alexandra Lamont, senior lecturer in music psychology at Keele University, stated that “Christmas pop songs are all about nostalgia – think about ‘White Christmas,’ which is the biggest selling song of all time. All the lyrics are about nostalgia and going back to Christmases in the past.”[xix] 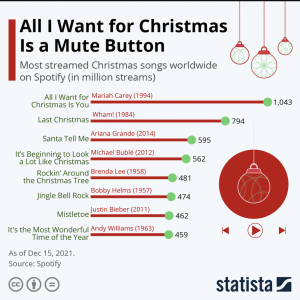 Statista also conducted a study last year based on Spotify’s most listened to Christmas songs worldwide. With three exceptions, all of the most popular songs in the measurement of million streams are at least twenty years old. This provides yet another example of older music’s popularity outshining newer music.

There is no doubt that catalog acquisitions present a significant opportunity for artists and companies that purchase their works. The acquisition deals through record labels and music publishers, as well as other investment-based companies like Hipgnosis, which then provide sync opportunities, have been great ways for artists to make money on their music. Despite the mixed opinions on the increased popularity of older songs, this nostalgia-fueled trend makes catalog acquisitions a nascent and profitable market for publishing and record companies.

[iv] Ingham, Primary Wave Has Over $1 Billion to Spend On Music Rights… and it’s Not Wasting Any Time 2021

View all posts by Amy Renzulli

One Reply to “Catalog Acquisitions: How Recent Industry Trends Are Bringing Older Music Back into the Spotlight”