With both dismal CD sales and the advent of 360 deals, many observers and artists consider money generated from the sale of recordings as ancillary revenue. This seems to be right. After all, the number one album of the year no longer sells close to ten million units as it did at the turn of the millennium. In 2011, 21 by Adele sold nearly six million units according to Nielsen Soundscan; when the album passed the ten million mark in 2012 there was word that it was the new Thriller of our times. In fact, only thirteen titles sold one million copies in 2011– in 2001 there were more than one hundred such titles.1 Recorded music income must be a diminishing component of an artist’s livelihood, and the unbundling of individual songs from albums is unlikely to have helped.

Moreover, as will be seen, the data suggests that the overwhelming majority of artists almost never receive a royalty check. Aaron Van Duyne III, a prominent CPA and business manager for several popular artists, maintains that before superstardom, the high cost of production and promotion, along with the 9.1 cents paid by the labels for the mechanical rate, makes it close to impossible for artists to collect any money on artist royalties.2

Unsurprisingly, several artists have taken a different approach to earnings.

In 2007, Radiohead experimented with an idea to release In Rainbows on a pay-what-you-like basis.  Taking into consideration that fans would pay nothing for the album, and using the appetite of the fanatic fan to cough up big money for the box set, the project did generate more revenue than their previous release in 2003.3 Prince too bypassed standard procedure. He released Planet Earth as a tool to promote his live shows by including a free add-on in 2.8 million copies of the The Mail on Sunday.  The British newspaper newspaper paid Prince one million dollars for the product.  In 2010, Prince made similar arrangements to release 20Ten exclusively to European newspapers stating that it’s “the best way to go; no charts, no internet piracy, and no stress”4

Recently, a series of new business models have developed tailored to the artist’s specific fanbase with hopes that revenue generated by all of the artist’s activities will produce income in a timely manner.  For the most part, these models ignore the sales from recorded music as a revenue stream.  One of the most popular models was explained by Tom Silverman, CEO of Tommy Boy Records, at the New Music Seminar in the summer of 2009. For Silverman, becoming successful was no longer about selling recordings: the new business model was about converting potential fans to passive fans and then to active fans, hoping some of them would become fanatic fans; as the fans moved up this sequence, the number of fans decreased but the amount of money spent by each fan increased.5

The cost of launching an artist’s recording versus the artist’s cut of the revenue to payback those costs has been documented throughout the industry in textbooks, articles, and blogs. Even when selling millions, the payment formula has always favored the recording companies.  Recoupment of all expenses, i.e. deductions, must occur prior to the artist receiving any revenue. Consequently for most artists the live performance revenue has been the main source of income.  For instance, when commenting on the business of the 1990’s, even Keith Richards could state that “touring was the only way to survive; record royalties barely paid overheads”.6

As Anthony N. Luti states on Lutilaw.com: “it is essential that [a band or artist] take into consideration all of their deductions when evaluating a royalty rate [as] on average, [they] can expect about $1.00 in royalties for each full-priced $16.98 CD sold through normal retail channels.” He continues:  “approximately 80% of albums never reach [the breakeven] point; obviously, this means that most artists never receive any royalty checks.”7

In All You Need to Know About The Music Business, Don Passman shows that with a retail price of $10 and a 10% artist royalty, after deductions, an artists receives only 75 cents8; this is because a new artist signing to a major label can expect a recording advance of $100k to $250k with tour support ranging from $50k to $150k per tour –all of which is recoupable.9

Jeffrey and Todd Brabec write that a new artist usually receives a royalty rate of 10% to 12% and a recording fund of $200k10; with deductions, the artist could realize half that rate.11

David Baskerville’s Music Business Handbook declares that “the royalty offer will be in the range of 10% to 15% of the retail price.”12 Furthermore, “most recording deals are unrecouped-meaning the artist frequently sees no royalties beyond payment for the delivering the master to the label.”13

Stephen Marcone writes that, under the old system with a 12% royalty rate and after all allowances and deductions, the artist may net approximately $1 per unit sold.  Coupled with a debt of at least $300,000 to record, manufacture, and promote a release, the artist must sell 300,000 units before generating any revenue.14

The HowStuffWorks webpage notes that artists make between 8% and 25% royalty rate (based on the clout of the artist); however, expenses can reach $800,000 by day of launch.15 In an article about a class action suit against Warner Music about shortchanging artists on digital downloads, Justia.com states the artist is paid: “at a ten-percent royalty rate under the ‘sold’ equation of the parties’ original 1972 Agreement”16.

Finally, Paul Allen writes that after all is said and done, an artist will receive $1.04 from the sale of a CD and $.99 from iTunes for 10 downloads.17

With regard to the recording revenue clause in 360 deals, most companies give the artist a better royalty rate but not necessarily a better royalty base; which means that an overall bigger piece of the pie is in consideration.

Paul Allen states that after recoupment, “the label will give the artist 30% of the earnings from the album.”18 Marcone offers an example of an artist’s royalty rate of 20% with a 60%–40% split favoring the label, after recoupment.19 Van Duyne explains that pertaining to the advance specifically attached to recording royalties, the record company will ask for a return in the neighborhood of 20% of receipts after recoupment.   If one takes into consideration the splits on rest of the deal, most artist do not fare any better.20 In addition, The Digital Trends website reports that   “the amount of money most artists see is usually indistinguishable from $0.”21 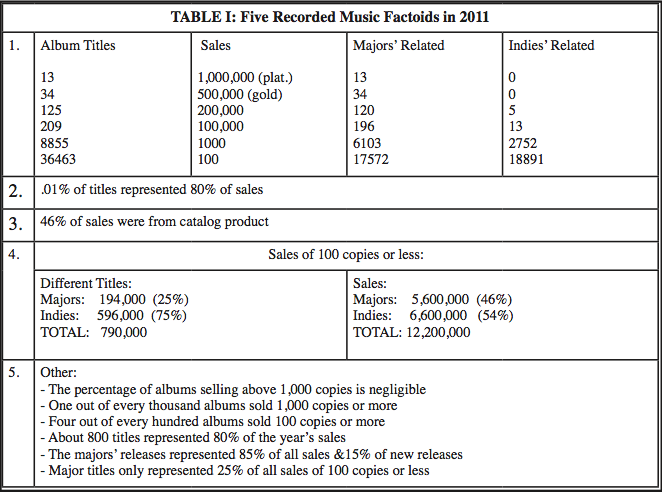 The three top selling albums in 2011 were 21 by Adele, with 5.8 million units; Christmas by Michael Buble, with 2.5 million units; and Born This Way by Lady Gaga, with 2.1 million units.25 These artists most likely received artist royalty checks. However, only 125 titles or 0.014% of titles for sale, sold at least 200,000 copies or more.  This dismal number suggests that only a few lucky artists cashed royalty checks. Less may be expected to make this sort of money in the future.

The data also appears to show that even with the smaller recording budgets, an indie artist still has only a slim chance to recoup (only five indie releases sold 200,000 copies or more).

In addition, if only four percent of the titles sell one hundred copies or more, A&R departments are arguably in trouble justifying signings when recording advances for new artists range, as is said by experts, between $250,000 to $1million. Finally, if approximately 800 titles represented 80% of 2011 sales, the much discussed long tail theory, where gains are made by lesser known records at the expense of the most popular, does not hold much water: the consumer is basically still primarily interested in purchasing the hits.

Overall, it appears that album sales were not a revenue stream for the majority of artists in 2011.  The industry and consumer should perhaps stop judging the success of a musical artist by the number of records sold or the major labels behind them.  As the Internet becomes the viable tool for exposure, recorded music revenue will be identified by the role it most likely has always played for most artists: that of a promotional tool.

2 Replies to “The Poverty of Artist Royalties”