By: Ava Roche and Samuel Smith

Since their introduction, streaming services have grown to become the primary platform for music consumption within the North American and European music markets. Streaming services now account for 75% of total music industry revenue. According to the Recording Industry Association of America, over 70,000 different albums were released by the middle of the year, recorded music revenues had reached $4.6 billion, and music streaming revenues reached $3.4 billion. 1 There’s no denying that streaming has taken over as the dominant force in the music industry, but there is one question that permeates the industry: where is the revenue going, and how can it get into the hands of artists?

Spotify is currently the top streaming platform, with 75 million users 2 and expected revenue of over $6 billion in 2018. 3 With over 30 million songs already on the platform and an estimated 24,000 songs uploaded every day, Spotify continues to grow rapidly. The music industry is bursting with content, but countless artists frequently complain about not getting paid enough while Spotify claims to pay an average of $0.006-$0.0084 per stream to rights holders. With labels and publishers often getting 50-90% of that revenue, artists on average, make only 10% of their streaming revenue from the site. Out of the 2 million artists now on Spotify, the top 1% make 77% of all artist revenue. 4 While this figure may not be surprising, as the top 1% of artists get millions of streams, the current system of dividing revenues places the other 99% of artists at a serious disadvantage.

The Pro Rata model, currently used by all major streaming platforms, means that monthly revenue from premium subscription costs and advertisement revenues is collected into one pool of money. Spotify takes 30% of that revenue and distributes the rest based on artist’s total listening numbers, rather than the listening times of individual users. Meaning that, even if a user never listens to the most streamed artists on the platform, a percentage of the money they pay will be given to the most streamed artists. Here’s how it breaks down: Drake’s “God’s Plan” was streamed over one billion times in 2018. If there were 20 billion songs streamed across the entire platform in 2018, then the rightful owners of “God’s Plan” would get five percent of the $9.99 you spend on your premium subscription, even if you as a user never listened to Drake.

This system becomes even more convoluted when royalty distribution is broken down further. For each dollar of revenue on “God’s Plan,” Spotify takes about 30 cents. 58 cents go to the sound recording owners, or Drake’s label and producers, 6 cents go to publishers and songwriters, and the remaining 6 cents will go to Drake, after his PRO takes their cut. ASCAP, Drake’s PRO takes 16-18% of performance royalties, so, in the end, Drake would only make 4 or 5 cents out of the dollar made by the song. 5 Drake has over a billion plays on “God’s Plan,” and likely walked away with over $50 million in royalty revenue from this song alone, but most artists are not as lucky. A signed solo artist needs over a million streams on Spotify just to make the federal minimum wage, and an unsigned artist needs over 170,000 streams. 6

Big name artists such as Taylor Swift and Thom Yorke have been very vocal about their discontent with the way in which royalties are distributed by Spotify. David Crosby told Rolling Stone that “they’ve rigged it so they don’t have to pay the artist… I used to make money off my records, but now I don’t make any.” 7 Songwriters and publishers have been very critical as well. Wixen Music Publishing, which licenses music from artists such as Tom Petty, Missy Elliott, and The Beach Boys sued Spotify for $1.6 billion earlier this year, alleging that Spotify was using songs without the correct licensing. The company argues that Spotify has not made sufficient efforts to identify rights holders. 8 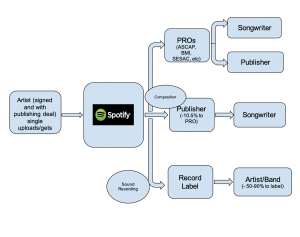 As you can see from the flowchart, there are many layers money has to go through before it actually reaches the artist or the songwriter. This may have been acceptable when streaming services were starting out, but many artists and other industry higher-ups are arguing that things need to change to get the artists what they deserve.

When Spotify first started, it took a little while to grow the user base. It was understandable that they had to make some cuts in places to grow the company, as does any company starting out. In 2013, Spotify had 36 million active users, 6 million being subscribers, but by 2018, Spotify has grown to 191 million active users with more than 87 million being subscribers. 9 Even with all of the growth Spotify has experienced, they still use the same model they used in 2013 to pay their artists, the “Pro Rata” system. Many argue that this system is not fair to the artists, leading to new ideas on how the system should actually work.

One of the most popular suggested models is the idea of a “user-centric” payment structure. 10 This method suggests that the users’ payments through subscriptions still gets collected monthly; however, instead of distributing the money based on popularity, the money gets distributed based on what each individual user listened to. So let’s say an individual subscribed Spotify user just jammed to John Mayer in the month of September. Instead of dividing up that user’s monthly payments to all artists on Spotify based on most plays, that user’s payment would just go to John Mayer. Fair, right?

Will Page, Spotify’s director of economics says otherwise. In an interview with Rolling Stone he explains how the user-centric model costs more to operate due to the costs that go along with maintaining and analyzing individual Spotify accounts. Despite this statement, many are still for the change. In the same article, the Rolling Stone explains how Digital Media Finland did a report expressing the numbers behind the new system. In Spotify’s original pro rata system, the top 0.4% of artists received 9.9% of the total monthly pool of money Spotify received. In the user centric model, that 0.4% would’ve received 5.6% of the total cash, leaving that 4.3% to be distributed to other artists. 11

Other ideas have been suggested as well. George Howard, professor of Music Business/Management at Berklee, has suggested using blockchain to transfer money from the consumer to artist directly. He explains that “given the unethical foundation upon which the industry was built, and its many infamous shortcomings, nothing short of a wholesale reinvention will ever lead to real change.” 12 Certainly, it will take a lot of reinvention to modernize the music industry to streaming. More than just the streaming rates for songs need to change, however. Luckily in 2018, congress passed a bill that took some of the first steps toward making streaming fair to everyone: The Music Modernization Act.

The Music Modernization Act simplifies how streaming services pay artists, changes law deals for music recordings made before 1972, and helps producers get more royalties. Before the MMA, streaming services just had two options to start off with. Companies such as Apple, Google, and Amazon kicked off their streaming platforms slowly, getting all of the legalities sorted out before making it available to the consumer on the streaming platform. This obviously is great way to start out a streaming platform. However, companies such as Spotify and Pandora took another approach. They just put music up, even if they didn’t have the legal means to do it, creating a very large catalog right out of the gate, and eventually got sued by artists and publishers for doing so. But why didn’t they just take the steps companies like Apple and Google took?

The main reason why is because they couldn’t afford to. Apple, Google, and Amazon have been around for a while and have other forms of income. They can afford to take a slow approach because they can subsidize until the services become a profit. Streaming services like Spotify couldn’t afford to do this. If they wanted to make a profit, they had to go all in. They did, making a huge catalog of songs available to stream very quickly. The Music Modernization Act changes things by making only one clear step. A board of major publishers say what each company has to pay to get a majority of the copyrights using a “blanket license.” 13 This makes it fair to everyone from the consumer to the artist.

It’s reassuring to know that people are continuing to think of new ways to make streaming music fair to everyone so that the artist gets paid and the consumer has easier access to music. With support from the U.S. government and major artists for the Music Modernization Act, there will definitely be upcoming growth in the music industry, hopefully the near future.

6 McKenna, Brittney. “How Many Songs You Have to Stream to Pay a Musician Minimum Wage.” Mic. October 25, 2015. Accessed December 16, 2018. https://mic.com/articles/115384/this-is-how-many-streams-a-musician-needs-to-make-minimum-wage-in-america#.kUOpliv2y.

View all posts by Ava Roche and Samuel Smith