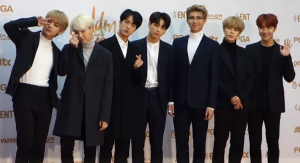 Korean Pop made major headlines in the United States in 2017. After popular K-pop group Beyond the Scene, or BTS, won the Billboard’s Top Social Artist award, the group and K-Pop itself were once again brought into mainstream media in the US. Following previous success from K-pop star Psy, which brought the genre to the forefront with his 2012 hit “Gangnam Style,” the catchy beats and consistent production quality has garnered a worldwide following regardless of the language.

K-Pop is a relatively new genre, being first established in mainstream media in the 1980s. Lee Soo Man, the founder of major Korean label SM Entertainment, was inspired by MTV while in the US and returned to South Korea to found his company. Launching K-Pop groups such as H.O.T., Super Junior, and many more, the establishment and success of these acts led to a movement of several Korean companies investing in music.

Since then, K-pop has hatched an entire industry including music production houses, music distributors, event management companies, and other merchandise and service providers. The three largest record labels in the Korean music industry are SM Entertainment, YG Entertainment and JYP Entertainment, often referred to as the “Big Three.” These labels also function as representative agencies for their artists. They are often involved in the recruiting, financing, training, and marketing of new artists, as well as managing their musical activities and public relations.

With huge fan bases globally, but particularly in Japan and China, K-Pop artists reached beyond South Korea at the turn of the century. Recently, China ended its ban on Korean entertainment, which had begun due to a dispute of US defense systems deployed in South Korea. The ban was a hurdle for many of the Korean entertainment companies, including many K-Pop companies, since it began in 2016; however, global interest in K-Pop still continued to grow over the years. For example, KCON, an annual Korean music convention organized by CJ E&M, Mnet Media, and Koreaboo, has expanded into eight countries around the world as of 2018.

SM Entertainment is the largest of the Big Three, and they have been strong throughout many years since the success of H.O.T. and S.E.S. from the mid 1990s. They have been successful in adapting their artists to a global audience rather than just focusing on the Korean fans. Over 90% of the subscribers on SM Entertainment’s YouTube Channel are not from South Korea.

Korean music companies often prefer to develop their artists from the ground up, investing in them from the early stages. They look for applicants who are trainable and marketable, even starting with kids as young as nine years old.  Once scouted, these artists are put through various programs involving singing and dancing lessons, performance techniques, interview skills, and foreign language lessons. The market for talent is highly competitive and, in a given year, more than thirty new K-Pop groups may debut; however, only a handful of groups tend to survive the initial year.

Utilizing social media such as YouTube, Twitter, and Instagram, K-Pop stars have made huge strides in connecting to their listeners from all over the world.  As sales of physical recordings continued to decline, the K-Pop industry focused more on touring and streaming as their main sources of revenue.  Social media has played a big part in promoting these ventures. These large K-pop companies have dedicated vast amounts of time and effort into perfecting social media promotion and activity for their artists, all in turn to promote their key assets of revenue.

It is known that SM Entertainment’s Lee Soo Man used YouTube as a marketing tool in the 2000s to promote SM artists globally, which is shown through the success of K-pop group Girls’ Generation (2007-present). The popular Korean band garnered global recognition from YouTube, which led to its enormous success. In the states, their music debuted on David Letterman’s Late Show, and the group briefly signed with Interscope Records to release their album.

An even more notable example of Korean music’s utilization of social media is the group BTS. In 2017, BTS of Big Hit Entertainment received several honors that included “Most Engagements for a Music Act” and was named the year’s most retweeted artist, winning the “Top Social Artist” award at the 2017 Billboard Music Awards. BTS’ label allowed the band to reveal more of their personalities on social media compared to other K-Pop groups and, because of this, BTS gained huge popularity in the western markets as well as the Asian music industry. BTS’s agency, Big Hit Entertainment, is a smaller company compared to the Big Three with comparatively fewer resources on hand, although they have proved that a good social media strategy can be immensely successful no matter the resources.

K-Pop artists have extremely devoted fans throughout different parts of the world. In turn, these artists work closely with their labels to foster direct-to-fan relationships and place much emphasis on cultivating devoted followings. The mindset of working to serve the fans in K-Pop is an extremely important cultural trend to both artists and their agencies, especially because K-Pop fan culture tends to be very active. In practice, fans get their own name, such as BTS’s ARMY and are generally very loyal, voting for their artist for awards, music shows, polls, and purchasing goods. Music sites covering K-Pop in English have popped up as well, aiding in getting the word out about K-Pop to non-Korean speakers.

SM has SMtown Coexartium where fans can go and experience fandom in all sorts of creative ways. They have celebrity shops with artist related goods, various photos, recordings, dances, dresses, and even cafés. They also offer music and special goods, SMtown Theater, Hologram Theater, and provide interactive amusement as well as 3D. Beyond the music, the company places considerable emphasis on immersive experiences to harness lifetime fan-to-artist relationships.

K-Pop companies have long been trying to take these same connections and expand them internationally to adjacent markets. Some companies openly recruit artists from other countries and put effort into tailoring these groups towards particular areas of the globe, taking popular musical acts from one country and translating them into applicable acts in another. An example of this is SM Entertainment’s boy group EXO. There are two versions of the group: EXO-K (‘K’ for Korean) and EXO-M (‘M’ for Mandarin). Each sub-group has members from each country, and EXO-K sings in Korean while EXO-M sings in Mandarin.

K-Pop has reached levels that seemed unreachable in previous years due to management style, social media presence, development of music and video production skills over the years and notable artist-to-fan relationship emphasis. Without these qualities, K-Pop would not be the phenomenon we know today.

Many K-Pop acts, such as Girls’ Generation, have taken steps to expand internationally through collaboration with American musicians and producers.  Writing for K-Pop has turned into a growingly competitive field.  Artists such as Steve Aoki, Teddy Riley, and Bruno Mars have worked with popular K-Pop acts, and we are now seeing US based artists trying to break into the Korean music market as well.

With new economic growth opportunities and the business of entertainment growing in Asia, new markets are being developed.  The emergence of K-Pop shows that the global music market is vibrant and growing significantly.

BRUNER, RAISA. These Are the Best K-Pop Groups You Should Know About. 9 Feb 2018.

Coscarelli, Joe. Meet the Stereotypes, the Guys Who Help Give Bruno Mars His Bounce. 24 Jan 2018.

Herman, Tamar. YG Plus Teams Up With Gracenote to Bring K-Pop to More Listeners Around the Globe. 25 Jan 2018.

Nattrass, JJ. BTS Are Getting A Game Where Fans Can ‘Manage And Foster’ The K-Pop Giants. 6 Feb 2018.