Currently, there are hopes that music streaming may become an important source of revenue, possibly replacing traditional physical revenue. There are already two types of streaming models. The first is the interactive streaming model, also known as on-demand streaming, which enables users to listen to specific songs they choose. Websites that provide these services are Facebook, MySpace, MOG, imeem, Lala and iTunes. On the other hand, sites like Pandora, Slacker, we7, Last.fm, and Internet radio in general are all examples of non-interactive streaming. A specific play list is created by these services based on the user’s choice of artists, but money is not being charged during the streaming of the play list (however, there are ads being played in between the list of songs, which helps these services make revenue). Users of non-interactive streams are also often able to upgrade to premium services, where no ads are played in between the songs.
Many wonder if music streaming actually generates enough revenue for the labels and the artist. According to a Billboard’s 2010 Money Maker list, revenue by even top artists is currently low. Non-interactive streams dominate and interactive streams have yet to gather momentum. Excluding publishing royalties, only 10 out of every 100 artists on Billboard’s list make more than $2,000 in non-interactive streams, with Beyonce topping the chart. By comparison, only twenty-five artists made more than $1,000 through on-demand, or interactive, streams. In the latter case, Michael Jackson topped the list. [1]
According to Billboard, moreover, a large amount of revenue was made by artists using digital channels other than streaming. There were at least thirteen artists who made $200,000 just from digital downloads. Michael Jackson was at the top of the list with $800,000, and next came twenty-six artists that sold $100,000 or more. Subscription download services such as Napster showed even better receipts, and artists like Taylor Swift, Nickleback, and Jackson generated over $500,000. It is not surprising that labels wonder whether streaming can take the place of digital mainstream in the future. [2] 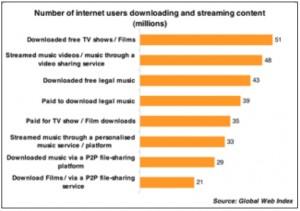 Research that was conducted by Lightspeed Research recently suggests that music streaming models might be a solution to piracy. According to their results, the number of people using streams and legal downloads far exceed the number of people using illegal peer-to-peer downloads. Thirty nine million Internet users have willingly paid for legal music downloads and thirty three million have streamed music; apparently, there are only twenty nine million Internet users of peer-to-peer file sharing services offering downloads. [3]
As explained in Lightspeed’s study, consumers are downloading illegally due to a lack of practical alternatives online. In this sense, streaming can be the business answer to pircay. As Tom Smith, the Managing Director of Trendstream (a firm that collaborated with Lightspeed) says, “Why pirate when you can stream?” [4]
Certainly, while streaming music is becoming more popular with fans, the paradox is that artists are complaining about the small payments received. Some British artists, for instance, complain about meager earnings from Spotify. The Warner Music Group, one of the four major labels, recently argued that streaming was yielding such low returns that it decided that it was not even worth to consider licensing music to that end. Although it is not clear if Warner is removing their music from current services or simply declining new deals, this mindset might undermine anti-piracy efforts by removing a market that could potentially be an answer to digital theft.
One can understand, perhaps, why labels such as Warner may wish to stop licensing music to free music streaming services. Such services require a compulsory license, and herein is the rub.
When streams are played through these websites, they must obtain a performance license either from ASCAP, SESAC, BMI or directly from the copyright owner. If not, the websites are infringing copyrighted material. In addition, non-interactive streams fetch a compulsory license from SoundExchange (SoundExchange collects the royalty and distributes it to labels, artists, and performers; the royalty is fixed between the webcaster and SoundExchange, with 50% to the sound recording copyright going to the owner of the sound recording, 35% going to the featured artist, and 10% to all featured musicians in the recording).
The problem is that the compulsory license has a few conditions attached. Services are not allowed to play more than three songs from the same album or back-to-back tracks within 3 hours. Four songs from the same artist are not permitted in play three times in a row. Looped programming and archived programming are similarly restricted. Therefore, it may be hard for the labels to get their songs played frequently.
In addition, given the current low revenue from interactive streaming, the transaction costs of such licensing may be too high for the expected receipts. This is because interactive streaming has to recognize the exclusive rights of the copyright owner and recording label. Negotiations have to be done on a one-on-one basis and the process can be very frustrating, especially when there are very different starting positions from which to build compromise. For that reason, transactions are challenging, complex, and very time consuming.
Finally, interactive streaming follows more dynamic pricing for downloads and subscriptions in the marketplace. For example, typical single-track download are all over the place, typically at $0.49, $0.79 or $0.99, and $1.29, depending on the service. Album downloads too range between $4.99 and $9.99. Unlimited music streaming range subscriptions, on the other hand, are priced at $6.99, $8.95 or $9.95 per month. [5] All of which, of course, increases the sophistication, detail, and due diligence that the licensee must consider before granting the sound recording right. A recent document by Harry Fox, in March 2009, shows how complicated terms can be for interactive download and limited subscriptions.[6]

7 Replies to “The Complicated Business of Music Streams”